The study of Genesis causes huge debate and argument against believers and non-believers due to the "proof" of science; however, there are many issues in and of that itself. I will get in to the Evolution vs. Creationism argument at a later date. For now, I assume that creationism is completely irrefutable due to my whole and complete faith in the power, glory, truth, and faithfulness of the Lord. Within Creationism there is debate as to what Genesis is trying to say. One of the theories within creationism is Gap Theory or Ruin-Reconstruction Theory. This theory tries to reconcile the differences between biblical age and evolutionary age theories. 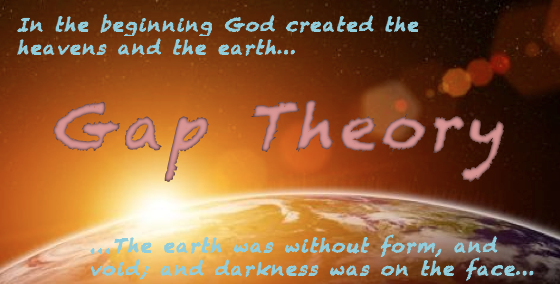 Gap Theorists look at the words on the original Hebrew pages in the Bible and see clues within Day 1 of the creation story. The hebrew word bara is used in this first passage, which means created out of nothing, something only God can do. So, In the beginning God created out of nothing the heaven and the earth. Pretty simple. In verse 2; however,

The interesting thing about this verse for Gap Theorists is pulled from Isaiah. In this verse,

Isaiah 45: 18 - For thus saith the Lord that created the heavens; God himself that formed the earth and made it; he hath established it, he created it not in vain, he formed it to be inhabited: I am the Lord; and there was none else.

The Gap Theorists believe that this verse indicated that the world was not created without form but in fact became that way over time. The verb haya is traditionally translated as "was" but it can also mean "became".  So it could read "The earth became without form". This is where the GAP part of gap theory comes from. They believe that this indicates a gap between verse 1 and verse 2. Many argue that there was creation; however, when it went bad (some say due to the fall of Lucifer) God made it without form to begin again.


Further evidence for a Gap is the story of the fall of Satan. In verse 1 God created the heavens and the earth after which he had to of created the angels, had Satan rebel, toss Satan out, and then create the earth. This is evidenced since Satan was already disgraced when the earth was created. Gap theorists believe that Satan took the earth as his domain and that is when God judged the earth and made it without form to create his own paradise and to further expel Satan, which we know did not exactly work out. If there isn't a gap, then when did this occur?

As I said, this is just one of the existing creationist theories. I do like the pulling of  modern day scientific findings in to further prove the theory. Science isn't bad. Science is wonderful. Science, astrophysics, and all of the related fields have given us so much knowledge and solid understanding. Why not use that understanding and basis to help to pronounce the good news of the creator of the earth? If people are so set to believe science and not faith or the Bible (though much of science is faith) then use that science! This use, however, just doesn't make sense scripturally.

First, for there to have been creation in 1:1 and then destruction of that creation there would have been death. The Bible clearly states that there was no death or evil before Adam and Eve's original sin.

Genesis 3:19 - In the sweat of your face you shall eat bread till you return to the ground, for out of it you were taken; for dust you are, and to dust you shall return.

So then how was Satan bad? I believe that his temptation of Eve in the garden may have begun his downfall, it was not the end of the downfall. Why do I think this? Simply because:

Ezekiel 28:12-15 : ..."You were the seal of perfection, full of wisdom and perfect in beauty. You were in Eden, the garden of God; Every precious stone was your covering: The sardius, topaz, and diamond, beryl,onyx, and jasper, sapphire, turquoise, and emerald with gold. The workmanship of your thimbrels and pipes was prepared for you on the day you were created. You were the anointed cherub who covers; I established you; You were on the holy mountain of God; you walked back and forth in the midst of fiery stones. You were perfect in your ways from the day you were created, till iniquity was found in you.

So what is the truth? Simply, the Bible doesn't say. Is there a gap? The Bible doesn't say. I am led to take the creation story literally. Is this the right way to read it? I don't know, but it is right in my heart and in my conviction through Christ. The hardest part of reading the Bible for non-believers, new believers, and scientific minded people is simply that the Bible doesn't say everything. Does this mean the Bible is wrong or that we should fill in our own gaps? No! It simply means it is not for us to know right now. God will reveal it in His own time.
Posted by Unknown at 7:46 PM