Prayer: Lord thank you for opening my eyes to this passage as I read my devotions before bed last night. You know the struggles that I have had in my life and You truly spoke to my heart through this passage. Thank You for helping me to see what it is You would have me do and to continue working in my life. Please help me to have the courage and strength to boldly do Your works.


Romans 5:1-4 - Therefore, having been justified by faith, we have peace with God through our Lord Jesus Christ, through whom also we have access by faith in this grace in which we stand, and rejoice in hope of the glory of God. And not only that, be we also glory in tribulations, knowing that tribulation produces perseverance; and perseverance, character; and character, hope.

I am currently working through a beginners reading plan as part of my daily devotionals. I chose this reading plan because it was described as, "The Bible Reading Plan for Beginners covers about 40% of the Bible in 170 days. You will read much of the Old Testament story, every chapter in Psalms and Proverbs, the gospels of Mark and John and several of the New Testament epistles (Romans, Philippians, Titus, and others). You will not read the details of the ceremonial law, lengthy genealogies, or difficult prophecies."  Am I saying that the things left out aren't important? ABSOLUTELY NOT! Every word in the Bible is important. As a new believer and beginner, however, I was looking to a reading plan that would point me to the most poignant points of the Bible for my stage in study. This reading plan should be complete in late August at which point I plan to pick up the remainder of what I haven't yet read through a complete reading plan.

Anyways, Last night I was reading through Genesis 9, 11, and Romans 5. The very opening passages of Romans really caught me. As I new believer I have been captivated by Paul's epistle to the Romans. Some scholars say that Romans is hard for new believers because it overwhelms them with the dense and weighty subject. I, however, can not get enough of it! My reading plan has me slowly making my way through Romans through the end of April. I really want to stick with the plan because it is said to be thematic based on the old testament readings but it is really hard. I may give in and just read the whole epistle because I am craving the word of this specific epistle and that has to be God's work!

I believe that my craving for the epistle of Romans has to do with the fact that the focus of the word is salvation. As a new believer I am so enthralled, enlightened, and overjoyed with the salvation that the Lord has bestowed upon me even though I am a sinner. I have done some really bad things in my life. I have certainly not lived a life to glorify God and I certainly don't deserve and kind of salvation in His arms; however, He still loves me. He still wants me to be with Him in His kingdom. It blows my mind. I am so thankful every morning when I get up knowing that I am safe in my saviors arms. I am able to face whatever darkness the world may bring each day knowing that I have the Light of the World in my heart and that I am called to help to lighten the world by spreading the Light. 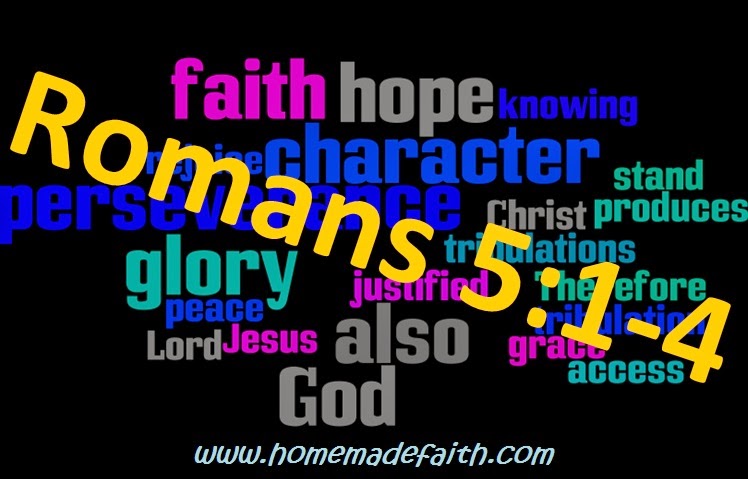 So, this posting has been led far from where I originally thought it would be. I didn't originally plan to write a post about my salvation or the call to accepting the Lord's salvation, but it is amazing what the Lord with put upon my heart and through my fingers. What I planned to write about was the pure hope that I see in the passage above. Specifically, I read verses 3-4.

In life there are bound to be tribulations, trials, and storms. There is nothing that we can do about it. So why do we have to go through these things? It is simple, to help strengthen our faith in the Lord. Jesus put the disciples through trial after trial and storm after storm. Particularly:


John 6:18-21 - Then the sea arose because a great wind was blowing. So when they had rowed about three or four miles, they saw Jesus walking on the sea and drawing near the boat; and they were afraid. But He said to them, It is I; do not be afraid." Then they willingly received Him into the boat, and immediately the boat was at the land where they were going.

This storm was only one of many that tested the disciples faith. During the storm and troubles all the disciples had to do was accept Christ in to their boat for the waters to calm. While teaching on this section of John, my pastor brought up that the Lord uses several different types of storms.


I loved the study on storms and tribulation; however, I am not sure that the full message fully embedded in my heart until I ran across the verses in Romans. I think that this could be added as a new type of storm.
I think it is really interesting to examine this verse with the different forms of the Bible. All translations of the Bible come from the same source, but then why do they appear to be so different. This is a fun way to explore verses that really speak to us and to our hearts.

Romans 5:3-4 (NKJV) - And not only that, be we also glory in tribulations, knowing that tribulation produces perseverance; and perseverance, character; and character, hope.

Romans 5:3-4 (KJV) - And not only so, but we glory in tribulations also: knowing that tribulation worketh patience; And patience, experience; and experience, hope:

Romans 5:3-4 (NIV) - Not only so, but we also glory in our sufferings, because we know that suffering produces perseverance; perseverance, character; and character, hope.

No matter the storm, tribulation, or trial that you may be going through, God has put it in to your life for a reason. In really reflecting on the passage in Romans, I love the thought that the trial or tribulation embeds you in perseverance. You can not simply run from the trials. You must face them in force. You must continue through the storms because it will cease eventually when your life has been changed in the way the Lord intended.

That perseverance through the storm builds character. Character is "strength and originality in a person's nature. synonyms: integrity, honor, moral strength, moral fiber, rectitude, uprightness;". So by persevering through the storm, we come out on the other end with honor, integrity, and dokimē (the Greek word meaning accepted, pleasing, acceptable). By exhibiting strong character, we can have hope in the future.

I love this look at the presence. I feel as though so much of the Bible speaks of what we should be looking forward to (and are looking forward to). We have salvation in the Lord which leads us to the Millennial Kingdom, which gives us eternal life with God, which gives us a future after death. So what about my life now? I am a sinner and I deserve nothing from God in the presence or in the future. I deserve the trials and tribulations in my life. This verse tells us, though, that by getting through the tribulations and struggles we gain a Godly character and that is what allows us to have hope for a brighter future. A future in which we are able to spread the Lord's light in the dark world. A future in which we are able and more than willing to yield to the Lord's wishes for our lives, whether they are our wishes, our families wishes, or our neighbors wishes we know that they are the Lord's wishes and we are doing a Godly work through our lives.
Posted by Unknown at 5:22 PM