Who is Jesus the Christ

Prayer: Lord please grant me the wisdom and the power of word and language. Please assist me in finding the passages within your Word to help me to portray what you would have me portray. Thank you for allowing me the privilege to analyze your Word according to a different way of thinking than traditional commentaries. Lord please help me to ensure that I am only doing, saying, and reading what you are meaning.

The chief character in The Bible is Jesus the Christ. The Old Testament is the prelude to Jesus coming to do his work on the Earth. It lays forth the information that is needed to identify Jesus when he appears as well as the history of the love Jesus has for the world. The New Testament begins with 4 separate stories of Jesus the Christ. The first three (Matthew, Mark, and Luke) are chronology gospels or synoptic gospels. They basically tell the same story from three different perspective, which allows us to see just a few of the many facets of Jesus. The fourth gospel (John) is more of a love story. It tells of John's love for the Lord, the Lord's love for his people and their world, and the love that is possible in the world through the Lord. Most of the rest of the New Testament generally helps the world to understand, appreciate, and live the good news from Jesus' life, death, and resurrection. 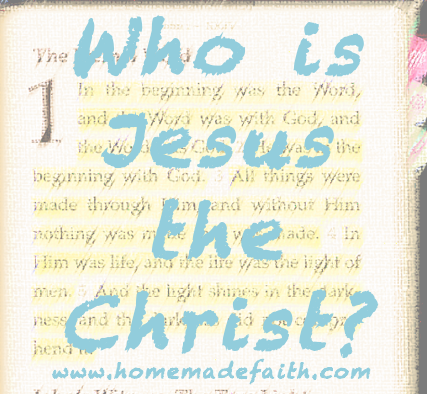 So, who is Jesus? Everyone, whether believer or non-believer knows the basic story of Jesus the Christ; however, there is great debate about who he is. I believe that this is a core understanding that one must have before reading any part of The Bible for it is all either the prelude to, the life of, or the life because of Jesus the Christ. So, was he a great teacher, was he a prophet, or is he the Son of God.

As believers we know that Jesus the Christ is the Son of God. We say is because He is the ever living God. But what do we mean by the Son of God. Is Jesus the Christ a separate being entirely from God? Is Jesus God? Never in his life did Jesus say "I am God"; however, he did allude to it as did many of His disciples. My favorite passage of this is:

So, what does this mean? Is Jesus God? In the beginning was the Word refers back to Genesis 1:1 "In the beginning God created the heavens and the earth." So when John says The Word he is referring to God. The next passage; however, says that the Word was with God and the Word was God. So in essence these are the same thing. He was with God, but he is also God. This may be totally bizarre, but I look at it as, All thumbs are fingers but not all fingers are thumbs. Jesus is God but not all God is Jesus. Is that totally off base or weird?

You see this kind of symmetry again when looking at Jesus' word in referral to a famous passage, Exodus 3:14 "And God said to Moses, 'I AM WHO I AM.' And He said, "Thus you shall say to the children of Israel, 'I AM sent me to you.'" I AM. God refers to himself as I AM. Jesus then refers back to this passage in:

John 5: 45-47 - Do not think that I shall accuse you to the Father,
there is one who accuses you - Moses, in whom you trust. For if you believed
Moses, you would believe me; for he wrote about Me. But if you do not
believe his writings, how will you believe My words?

To religious Jews of the day this would have really made them sit up and think. They would have taken the Torah to heart. Moses was one of the most well known and one of the most talked about Patriarchs. How then could they doubt Moses? How can we doubt Moses in 2015? Can you believe part of The Bible and not all? No, because as we realized in a previous study, The Bible is one book or Truth, it is not a compilation of story and lore.

So does it matter? I believe that it does. The basis of our Faith and Grace and New Life is centered on the one truth that Jesus was born, lived a sinless life, and was offered as a sacrifice for the sins of worldly man.

This is another clear depiction of who is Jesus the Christ. He lived a sinless life. Who else can have claimed that? No other. Certain religions claim that Jesus is a major prophet; however, prophets, while wonderful tools of the Lord, are still sinners by birth. One in particular, Mohammed. In the Koran Mohammed is commanded to seek forgiveness for his sins. Jesus is never given this same command. In fact


2 Corinthians 5:21 - For He made Him who knew no sin to be sin for us, that we might become the righteousness of God in Him.

1 John 3:5 - And you know that He was manifested to take away our sins, and in Him there is no sin.

All people born on the Earth are of a sinful nature. The penalty of Adam's sin was that all of his descendants would therefore inherit his sinful nature. In fact, in the Psalms David reiterated this fact by saying "Behold, I was brought forth in iniquity, and in sin my mother conceived me." (Psalm 51:5). Since every human being on Earth is a descendant from Adam and Eve, every human being on Earth is born in to sin. How then is Jesus sinless? The only way that he would be without sin would be if he was not actually a human being. In fact, Jesus is a deity who took human form to help cleanse the world of sin. Since he was not of full human birth, he was not born in to original sin and as a human did not commit a sin.

So, Is this really important? YES! We can not achieve salvation without acceptance of Jesus as the Son of God. The belief that He came to the Earth to die for our sins and that He conquered death and is seated at the right hand of the Father waiting for the prescribed time and date at which He will return to Earth to gather His church so that He may plant His millennial kingdom.